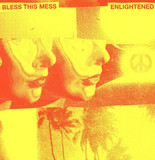 We Bless This Mess

Featuring We Bless This Mess

We Bless This Mess arises by the need to explore the premise “less is more” and the desire to externalize the true positivity and knowledge to the world – “we breathe, we’re alive. This is the greatest gift and it’s simple”. The project has travelled to the biggest Showcase Festivals such as Eurosonic Noorderslag, Reeperbahn, SXSW and Indie Music Week (USA), Live at Heart, Ment Ljubljana, Waves Vienna or even Europavox. More recently, it needs to be highlighted the performances at one of the biggest European festivals, Sziget (Hungary) as well as the one at Punk Rock Holiday (Slovenia) and Manchester Punk Festival. "Awareness Songs & Side Stories" was released in September 2018 marks a change in the sound and constitution of the band. It’s the first full band record conceived between London and Portugal apart from its first single ‘Ocean’ released 1 year before. The release tour with band went to 8 different countries including the USA with the performance at The Fest (Florida). The latest EP "Unburden" was released in September 2019 in Lincoln UK with Sam Cook. Unburden is an acoustic EP that brings the old vibes of We Bless This Mess, where Nelson sings about surrender and acceptance, that life is too precious and fragile to ignore it.