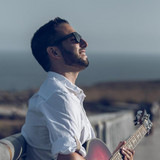 Brian Scavullo is an American born singer-songwriter who is currently residing in Alicante, Spain. Born in Albany, New York in 1987, Scavullo has always held a close relationship with music. He began playing the guitar at age twelve, which would eventually lead him to writing his first song at the age of sixteen. Highly influenced by his Italian origins, Scavullo does a wonderful job at combining both his European roots and American upbringing to create a uniquely original and inspiring sound. His vocals carry a warm and organic tone that is instantly uplifting and incredibly memorable. Paired with the unforgettable guitar hooks, Scavullo crafts an environment and atmosphere destined to captivate audiences from across the world. In 2019 Scavullo released his debut full length album, “Mixed Emotions,” which was well received and has inspired Scavullo to follow up with an American and European tour. The album is filled with mesmerizing tracks such as, “What Can I Do” and “Here In My Arms” where listeners are able to hear the full range of Scavullo’s talents. Having been compared to artists such as Shawn Mendes, it’s only a matter of time before Scavullo’s notable style and sound take him to new places where he can showcase his gifted songwriting abilities for the world to see.