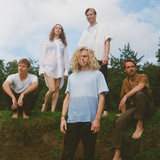 FOSS creates dreamy music with a mysterious vibe, where guitar lines and synths come together into eclectic indie-pop. The act was founded in Iceland but the formation nowadays operates completely DIY-style in their hometown: Utrecht. In synergy, the five friends create extra depth in the music in both production and lyrics. The live aspect manages to add a new dimension and energy to their music. A double EP is currently being finalized, of which the first single 'Heartbeats' has been released. Photo's by Luna Brouwers Styling by Angela Segard