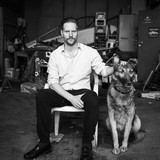 The Sweet Serenades was formed in Stockholm by Martin Nordvall and Mathias Näslund. With their album debut

"Balcony Cigarettes" (2009) the band established a sound based on simple chords, strong melodies and big emotions. Their songs have travelled around the world thanks to touring, blog buzz and placements in TV-shows such as Grey's Anatomy and The Fosters. With the following releases HELP ME! (2012), Stand by Me EP (2013) and Animals (2015) The Sweet Serenades have gradually gone from Indie rock with a taste of garage to a more atmospheric and soft sound; Arena-Indie designed for small clubs. Mathias Näslund left the band in 2014 and The Sweet Serenades have since then been a one man band. In 2020 The Sweet Serenades is releasing album no 4 "City Lights" produced by Johannes Berglund (Fever Ray, Shout out Louds). "The Sweet Serenades are one of those groups where the music and lyrics come hand-in-hand, with each aspect relying on the other to evoke its full potential and power.” Alex Young - Consequence of Sound "The Sweet Serenades