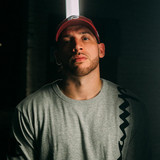 Conceptz was born October 3, 1990 in Providence, Rhode Island. Conceptz met music at an early age his father playing in a Funk band across the country. His love for Hip Hop grew freestyling and making music with the people he grew with.

From robbing corner stores to losing his father and best friend. Conceptz made music to help cope with what he saw and knew until he met God. Christ restored his mind, delivered him from addiction and put alongside him brothers who would become the hip hop group Psalms of Men. Conceptz draws inspiration from his life and those around him bringing hope and inspiring the people he grew up with to want something more out of life. Conceptz dropped his first album “Red Water” and a year later, he follows it up with his newest Album COVERED.