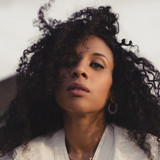 IMAN is a British artist, she began her music career writing for major international acts, working with artists under labels such as Sony BMG, Polydor, Warner Music and Virgin EMI. Establishing herself in the industry as both a talented vocalist, and a prolific songwriter, many of the records she has worked on have made the official charts, and been certified multi-platinum and gold in countries around the World. An artist in her own right, IMAN’s music has strong electronic, r&amp;b, soul and pop influences. Her single ‘Wishing’ hit #3 on The UK Urban Charts and #10 in the UK Pop Commercial Charts. The single made it onto 17 Spotify playlists including Warner’s Topsify and was supported by KISS FRESH. Brands such as NIKE (UK), PUMA (UK &amp; Germany), leading female retailers MISSGUIDED, H&amp;M (Worldwide), Virgin and Dune also playlisted the record. ‘Wishing’ was also played across the Netherlands, Japan and Australia in major retail stores, shopping centres and gyms. ‘Wishing’ made RECORD OF THE DAY and was nominated for BEST UNSIGNED SONG at the Best of British Music Awards.The official remix is by Matt Jam Lamont &amp; Scott Diaz. IMAN has most recently been awarded sponsorship by PRS Momentum, Spotify UK, PPL, The National Lottery and The Arts Council.