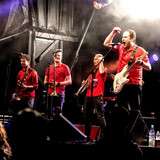 SPAWN is a high energy brass fuelled skapunk band from the Netherlands, keeping the beat rocksteady and the upstrokes a-skankin'. In October 2016, SPAWN released "Dance of the Lunatics".

"With their third album, they've definitely found the groove and locked it down. "Dance of the Lunatics" is a huge, bouncing, sweaty dance machine perched on 14 legs and having the time of its life." [Louder Than War, 2016] Since releasing "Dance of the Lunatics", SPAWN have featured on many Dutch, English and American radio shows. “This is so much fun. You’re gonna love this. Mega riffs, Killer beats and some serious funk. Fuuuunk!” [Soundsphere magazine, 2016]