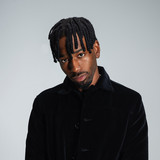 Jireel is a 21 year old rapper/singer/songwriter from Stockholm, Sweden. He released his first single in 2016 and has since accumulated over 250 million streams on Spotify. His debut EP "Jettad" included the hit singles "Cataleya" and "Snap", both of which went platinum only a few months after their respective releases. In 2018 Jireel won "Artist Of The Year" award at the prestigious Swedish P3 Guld and "Best New Act" at Grammis, the Swedish Grammy awards.

Following the line of success, Jireel followed suit with the studio album "18", eventually winning a grammy for the single "Alla Mina" ft. K27 in 2019, as well as his second "Best Hiphop"-award. In 2020 Jireel dropped his album ”Sen Känslor” that was featured by artists such as Miriam Bryant and Victor Leksell. Once again the nominations rolled in, including a P3 Guld award for "Artist Of The Year" as well as the prestigious Musikförläggarnas Pris "Songwriter Of The Year"-award. Jireel started off 2021 with his most personal EP to date "1953", detailing the loss of his father, born in the year of 1953. Moving past the songs that defined 1953, Jireel started looking for new sounds in 2021 and eventually penned a deal with the music label Asylum Records in Sweden. The first two tracks released via the label includes the infectious afrobeat track "Passé", a song written and produced on a trip to Nigeria. The latest release "Dagar i regn" released on the 4th of November 2021.