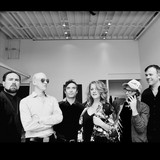 With approaching 20 years as a band and a storied album catalogue spanning 2001’s Nightsongs, the romantic upheaval of 2003’s Heart and 2004’s Set Yourself On Fire, 2007’s In Our Bedroom After the War, the downcast elegies of 2010’s The Five Ghosts, the rejuvenation of 2012’s The North and sub-base, dance club infused No One Is Lost in 2014, Stars continue to prove themselves some of the finest musical storytellers in the country, moving through life with their fans. Recorded in Montreal and Connecticut with producer Peter Katis (The National, Japandroids, Jonsi), There Is No Love In Fluorescent Light marks the first time the band shared creative control with someone outside the group. Lyrically, it veers into a world inhabited by characters that have lived inside Stars songs for almost twenty years: a place where people do desperate things in the name of love, a place where the cruelty and coldness of the technological world we live in often smashes up against the frailties of the human heart.