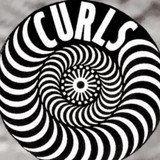 Against all odds, Curls is a rock and roll band from San Francisco. Theirs fits the familiar narrative of many a creative endeavor in the up-and-down Gold Rush town. But with anything less than the defiant perseverance and help of each of you, the first caring persons to read this declaration, Curls’ being would have trampled the dying embers of the musical bonfire that came to be known as Girls.  Curls was initially formed in late 2016 when celebrated songwriter Christopher Owens

(formerly of Girls, Holy Shit, solo) enlisted musicians Cody Rhodes (Geographer , Lapel, Sandy's) and Luke Baće (LakeCube, Firemaid, Big Tree) to be his rhythm section for a one-off performance in Oakland. United in service to Owens’ songs, their first performance together was musically sensitive, interactive, and inspired.  The spark that drove them to continue as a musical entity came when the three went to interpret several of Owens’ newest unreleased works and the feeling just clicked. In what Pitchfork has described as “expansive, serene, unruffled,” the resulting works became the trio’s debut EP, Vante