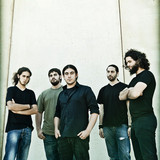 Deep Black Sees are an Italian progressive rock band, hailing from the hilly heart of Sicily. Their debut album, “Inside Outside” (Rising Records/PHD/Audioglobe), was produced by Sylvia Massy (Tool, SOAD) in California and received amazing feedback that attest to the band an “excellent debut” (Sonic Abuse, UK) and a “great future” (Rocktimes, D). Their furious venture started in 2003 at the early age of 13 years old, with a good helping of music in their cradle and rock in their blood.

After months of composition and touring, the idea of recording the band's first ever official album began to be more than real when well known Grammy nominated American record producer Sylvia Massy (Tool, R.E.M, Johnny Cash, System of A Down) hooked up with the band and decided to produce the record. In October 2010 the band then travelled to California’s RadioStar Studios. A month of intense arranging and recording led to the debut album ‘Inside Outside’, mastered at Kitchen Mastering (Carrboro, NC). Since February 2011 they have been officially signed by the experienced UK label Rising Records which released ‘Inside Outside’, out on the 27th of June 2011 and available worldwide (Plastichead/Cargo/Audioglobe). The band have recorded a brand new EP called ‘Listen=Silent’ in 2014 under the production of Fabio Rizzo from 800A Records (Pan Del Diavolo, Waines, Fabrizio Cammarata). The EP has been mastered in Austria by Hannes Jaeckl.