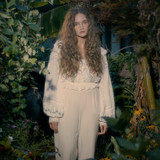 Hollyn is a pioneering, pop-indie, singer-songwriter living in Dallas, TX. Her soulful anthems cross musical genres and borders with introspective lyrics and ethereal melodies.   After debuting with the dynamic and fiery full-length album One-Way Conversations, Hollyn showed incredible momentum. Since then she’s released multiple singles and a six-song EP all of which continue to showcase her pop sensibilities, authentic writing and reflective lyrics that refuse to shy away from sharing the deep parts of her story. She’s endeared herself to a devoted audience hungry for her truth.   As her story unfolds, so does her artistry and musical offerings. Her audience finds themselves tucked away in the words she crafts almost as though they’re along for the journey.