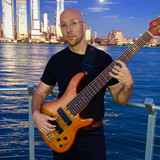 Nick Morrison’s self-titled release ties together multiple genres including jazz, rock, funk, and R&B seamlessly by uniting memorable melodies and strong improvisation with his bass at the forefront. He recorded his album at home during the summer of 2020 playing all the instruments including bass, guitar, and drums. Being busy playing bass alongside many of New York City’s greatest jazz musicians and singer-songwriters while simultaneously sharing his joy of music with his students, Nick never had the opportunity to release his own original music, until the unfortunate events of the pandemic hit. Nick has performed, recorded, and been mentored by legendary jazz trumpeter Clark Terry. He has played alongside jazz guitarist and Steeplechase recording artist Craig Brann for over 20 years with five albums to date. Additionally, he has shared the stage with many of the world's greatest musicians including drummers Rudy Royston, Jaimeo Brown, Mark Guiliana, Sanah Kadoura, and Josh Dion, singer/songwriters Robbie Gil and Jeff Taylor, saxophonists Greg Tardy and Mark Turner, and trumpeters John Raymond and Freddie Hendrix. Nick has amassed a large following on TikTok. Since joining the app in the spring of 2021, he has gained over 45,000 followers with over 400,000 likes and over 3 million views to date. Nick has found his audience through presenting his knowledge, enthusiasm, and love of bass playing and how it drives the music to millions of people across the world.