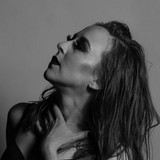 Dawn Hancock is an LA-based singer, songwriter, and artist. Her multidimensional music captures the full range of human emotion - from dark and gritty to soaring anthems to soft ballads - all with an epic, cinematic sound widely used in film and television. Her passion is to create music that leaves an imprint on the listener through emotionally vivid lyrics, powerful instrumentation, and her signature strong female vocals. Her biggest musical influences are the film composers whose scores she fell in love with as a child and who initiated her lifelong love of film music, including Hans Zimmer and James Horner, and the vocalists who inspired her to discover her own voice, including Mariah Carey and Kelly Clarkson. Her first EP, Reborn, was released in February 2019, and her second EP, In Too Deep, was released in November 2019. Both albums showcase the amalgamation of her passion, her influences, and her genre-bending approach to creating music. A prolific writer, Dawn is always working on new material so stay tuned. Dawn can be found on all social media platforms @thedawnhancock.