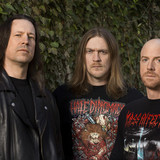 Though forever doomed, commercially speaking, by their controversial name, Maryland's Dying Fetus endured beyond most observers' wildest expectations. Formed in the waning days of death metal's glorious heyday (1991, to be exact) by John Gallagher (guitar/vocals), Nick Speleos (guitar), Brian Latta (guitar), Jason Netherton (bass), and Kevin Talley (drums), Dying Fetus combined their death metal with hardcore influences in order to develop their own form of American grindcore. But while pioneering bands like Napalm Death and Carcass had taken the U.K. and Europe by storm, this subgenre never really caught on in America, and had been utterly buried by grunge by the time Dying Fetus released their 1995 debut, Infatuation with Malevolence, which, admittedly did little more than collect their old demos into a single package. After downsizing to a quartet with Speleos' departure, the band truly began to hit its stride with a slew of increasingly confident and inspired releases, including 1996's Purification Through Violence, 1998's Killing on Adrenaline, and 2000's Destroy the Opposition. All the while, their notoriety continued to grow steadily within the extreme metal underground, as did their audience, thanks to a ferocious live presence and incessant touring at home and abroad with similarly aggressive bands like Kataklysm, the Crown, and Behemoth. Between road jaunts, the band kept itself busy by re-releasing an expanded version of its debut in 1999 and the Grotesque Impalement EP in 2000, but trouble was just around the corner. Midway through 2001, Gallagher was handed resignation letters from the other members of the group, who proceeded to join forces in a new project called Misery Index, and thus left the future of Dying Fetus very much in doubt. But to everyone's surprise, Gallagher wasted no time hiring an entirely new lineup consisting of vocalist Vince Matthews, guitarist Mike Kimball, bassist Sean Beasely, and drummer Erik Sayenga. A new single entitled "Vengeance Unleashed" was recorded to support the band's touring commitments, which included that year's Wacken Open Air Festival, after which Dying Fetus entered the studio to prepare their fifth album, 2003's eagerly awaited Stop at Nothing. The blistering War of Attrition appeared in 2007, followed three years later by Descend into Depravity -- both of them on Relapse. Arriving in 2012, Reign Supreme became their first to reach the main Billboard album charts. In 2017 the band issued its ninth studio long-player, Wrong One to Fuck With, again via Relapse. ~ Eduardo Rivadavia, Rovi