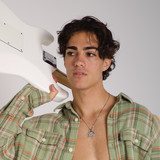 Crafting his organic sound by busking on the streets of North Queensland, René Le Feuvre ‘s style is nothing but heartfelt and authentic. Similar to the likes of Passenger and Ed Sheeran the young artist’s story-telling style of writing has already been recognised by industry professionals, taking out top-3 spot in Nashville’s Rising Song in 2019 and a top-40 nomination for the Vanda and Young Songwriting Competition in 2021.   After relocating at age 17 from a rural community of roughly 300 people in North Queensland to originally pursue a career in Australian rules football with the Gold Coast Suns, René instead found his true passion in music. An example of “taking every opportunity because you never know who’s watching”, 2020 would have seen René embark on his most ambitious outing yet, securing two showcases for the 2020 inaugural SXSW festival in Austin, Texas after performing at a random gig for an open house for less than 10 people. This career defining opportunity lost due to the current COVID-19 pandemic led René to return to his NQ home and create his most honest and fully realised material yet. This period of unprecedented times was documented in his debut singer/songwriter EP Watch Me Fall.   With a devoted team around him, 2021 will be a defining year for René as he transitions in his sound and branding. With four single releases mapped out for this year, his music will form a new EP, or rather a new chapter in his journey as an artist. Watch this space!