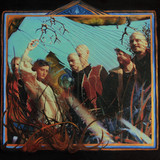 Orbiter is a Finnish doom metal band from Helsinki, founded at the turn of the year 2014-2015. The band has been influenced by the genre ancestor Black Sabbath, 90s stoner bands like Kyuss, and 21st century doom bands. Additional influences have been drawn from psychedelic and progressive rock. The band was originally formed by Alexander and Tuomas on the ruins of their earlier projects. Alexander asked his friend Sami, with whom he also shares earlier band history, to join the band as a drummer. Only a couple of months after, Jere joined the band as another guitarist. As a four-piece group Orbiter released three singles with Alexander on vocals: Oneironaut (2016), Gravity (2017), and Anthropocene (2019), which was also released on a 7” single split vinyl with Roadog. As Alexander wanted to give his full commitment to playing guitar, Orbiter decided to look for a new singer. After auditions with various singer candidates, Carolin joined the band in the spring 2019. The band’s debut EP, titled The Deluge, was released on 29 January 2020.