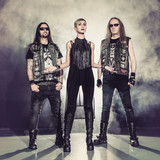 CADAVERIA is the creative alter-ego of Italian-based extreme metal singer Raffaella Rivarolo, better known by her stage name Cadaveria. CADAVERIA band was founded in 2001 by Cadaveria herself -one of the first women to hit the metal scene in the early Nineties- and drummer Marçelo Santos. Since CADAVERIA’s debut album The Shadows' Madame, released in 2002, the band’s style is labeled horror metal. Their personal sound is imbued with gloomy and sinister atmospheres and it mixes black metal with classical heavy metal, death metal and gothic influences. The lyrics, scheming, hermetic and introspective, mirror the dark soul and the vexed personality of the singer Cadaveria. Their second album Far Away from Conformity dropped in 2004, followed in 2007 by In Your Blood, the latter of which saw Cadaveria move from Scarlet Records to Season of Mist. In 2012 CADAVERIA release their fourth studio album, Horror Metal, that gets great consents worldwide. In October 2014 the group issues the single Carnival of Doom in anticipation of their fifth outing, Silence, which arrived a month later. In 2016 they release a split EP, Mondoscuro, with thrash metallers Necrodeath. On October the 2nd 2020 CADAVERIA release the single Return, which marks the band's return to the scene after a long pause, during which the singer had to be treated for cancer. They're now releasing a series of singles: Matryoshcada, Divination, Shamanic Path and The Woman Who Fell to Earth. Check them out.