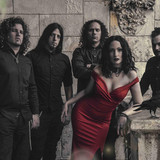 Leaded by the captivating Dragica Maletic, this 5 pieced musical act combines heavy riffs, beautiful atmospheres with incredible orchestral arrangements in a unique way. Its name was inspired by a medical term (Tinnitus Aurium) describing sounds of physiological or pathological origin, which may or may not always be perceived in consciousness. After releasing 2 albums of studio “Still Life” (2015) and “The Silent Moon” (2016) and touring all over Serbia, Bosnia & Herzegovina, Aurium will release their new & third album through Art Gates Records worldwide in June 19th.