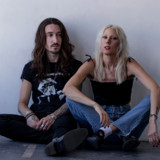 After a decade of wandering down the same NYC streets, musicians Richey Rose & Lina Sophie met in the fall of 2017 at Brooklyn bar, Night of Joy. Bonding over a mutual love for Swedish pop, 80s alternative/first-wave, and 00s electro, the two later formed Songs for Sabotage in early 2019. They played their debut show in August 2019 at Bushwick’s the Sultan Room and released 3 self-produced singles with b-side remixes by May 2020. Once COVID hit, the duo relocated to Rose’s hometown of Lexington, KY for several months. It’s here that they completed their first full-length album, fittingly titled Night of Joy, before ultimately relocating to Los Angeles. "Frenetic, pulsating, pared back when needed, all with tones of classic pop and rock, Night of Joy screams with the joy and frustration of city living and will hit home with anyone living in urban lockdown." - Angry Baby (UK) "LA alt-rock artists Songs for Sabotage cooked up the dreamiest feat of rock you’ll hear in 2020 with their cover of Peter Murphy’s 'Cuts You Up'." - A&R Factory “The moody, haunting sound is reminiscent of new wave stalwarts The Motels, Pat Benatar and a smattering of Suzanne Vega.” - Post-Punk.com “[Drifting] continues the duo’s trend of infectious, beat-driven tracks that’ll encourage you to get up and move around.” - LookAtMyRecords.com

"Fire” is the first track from the forthcoming Songs for Sabotage album, and it has dynamics as sharp as Sophie’s cheekbones." - ColdWarNightLife.com