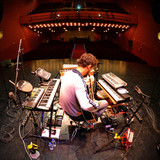 Noiserv is the solo project of David Santos born in Lisbon. A very poetic and ethereal universe that could easily relates to Yann Tiersen, Radiohead, Sigur Ros, Explosions in the sky, his main references. His first album “One hundred miles from Thoughtlessness” was released in 2008 and was critically acclaimed. It was followed by the EP “A day in the day of the days” and by the soundtrack for “José & Pilar”, an Oscars pre-selection documentary. In the end of 2013, he released “Almost Visible Orchestra” for which he received the prize “best record of the year” by the Portuguese National Authors Society. He had also some colabs in theatre acts doing live soundtracks and toured massively, first in Portugal but also: UK, Belgium, France, Germany, Holland, Slovenia, Austria, Sweden with a well-noticed performance at Eurosonic and at Europavox. This last was reviewed by les inrocks as “A tender triumph… Strong and opulent”. On 2015 “Almost Visible Orchestra” was released worldwide via the French label naïve, house of M83, Yann Tiersen, etc. In 2016, Noiserv released a conceptual record “00:00:00:00” a soundtrack for a movie that doesn't exists yet. On live performances Noiserv is known as a "one-man orquestra" using a lot of instruments, such metallophone, melodica, bells, several synths, omnichord, megaphone, guitars, vocals, toys, music boxes and many more all combined with the "well-known" loopstation, taking the concert into a completely new experience.