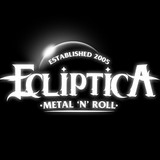 With four studio albums and a variety of acclaimed live shows from Vienna (Donauinselfest!) to Wacken incl. support shows for IN EXTREMO, SYMPHONY X, TIM RIPPER OWENS and many others, the Austrian "Metal 'n' Roll" heroes gained a loyal and constantly growing fan base beyond all national and genre borders. . This will be also satisfied with the new long player "15 In A Row", the title refers to the 15th anniversary of the band – and expanded vigorously. Ten songs (and a cover bonus track on the physical album) have long convinced the Viennese with their unique mix of hard rock and heavy metal – "Metal 'n' Roll" - and in the process skilfully transport the influences from the blessed eighties into a refreshingly modern sound dress: ECLIPTICA rocks powerfully on the pulse of time - and yet timeless. Whether it's the brisk "Masterpiece Of

Love", the Formula 1 Racing Hero Homage "Speed Kings" or the epic "Children Of The Universe": ECLIPTICA remain true to their line despite strongly audible further development and at the same time independent and unmistakable. Together with the bands "Oldies, But Goldies" like "Love And Misery" (place 5 in the Austrian iTunes charts!), "Need