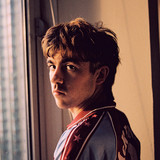 In late 2019, Declan McKenna headed out to Nashville to record his second album, Zeros, with producer Jay Joyce. By September 2020, he was battling out for a number 1 record with The Rolling Stones. Whilst Declan might have lost that particular battle to the Stones on the very last day of sales, it showed just how far Declan had come since his arrival. The boy most likely to had very quickly become the young man to beat. Declan’s latest album stands as a reflection of our own culture, in a warped carnival mirror sense, but always close enough to see a familiar face staring back. It reflects an entire generation which has been born into a world where there seem to be multiple realities: social media, fake news, post-truth. The unshakeable confidence and boldness of Declan’s voice and the stories he tells allows these songs to truly land; setting the tone for a world-building album, and this new world builds just as the world we know ends. His expansive, experimental structures and loss of inhibitions builds more than just a world but the entire sky and all the stars within it. These tracks and their characters are in constant conversation, they are subtly self-referencing, mature, complex and at times life-affirming but always unafraid to laugh… and Declan McKenna is laughing hysterically as he pushes the big red button.