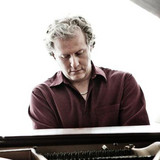 Vancouver pianist and composer Craig Addy has been improvising at the piano since he was a child. That child used to lie under the piano while his mother played beautiful classical music. In 2007, while visiting Showcase Pianos in Vancouver, Craig found himself under a piano again. It had been over 30 years. The power of his childhood experience came flooding back, but this time with a conscious awareness of the effects the vibrations were having on his entire body. Craig combined his unique improvisational artistry with the experience of lying under his grand piano and began sharing this with people in his life. Childhood play and the adult boldness to be playful like a child is how “Under the Piano” was born. Craig is also a member of the Amicus Music Duo (with clarinetist Howard Meadows) and the Quiet Hearts Ensemble (with clarinetist Howard Meadows, violinist & vocalist Mark De Silva, flautist & vocalist Anand David, and guest artists). Quiet Hearts Ensemble’s “Music Oasis” features spontaneously improvised music, usually in the glorious acoustics of venues such as Vancouver’s St Andrew’s-Wesley United Church.