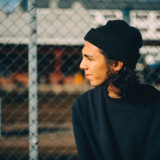 Lo-Fi indie meets Bedroom Pop influenced by Disco, and a 80´s filled family record collection.   Swedish award nominated Sam Florian creates and records his music in his home studio, bringing in friends and peers to push his creative boundaries. Sam Florian quickly gained international attention with early breakthrough release “In My Body” (Late 2018) which was featured on “All New Indie” “Indie Highlights” “New Music Friday” “Indie Chill out” “Downtempo Beats” to name just a few playlist adds.   Since the early breakthrough Sam has amassed an impressive catalogue of over 30 releases.   2021 will see Sam Florian regain his love for creating as he collaborates with some of the best up and coming female artists. The first single in what feels like a “fresh start” to Sam is “Pretty But Stupid” a collaboration with the wonderful Indonesian artist nabrl. In Sam's words, “Pretty But Stupid is about being stuck in a toxic relationship, not being brave enough to end it, or mature enough to give it the energy it needs”   "Pretty But Stupid" is out April 23rd via Made Friday.