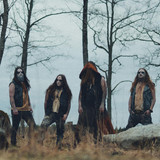 Formed in 2014, Wormwood have had quite the musical journey. Starting off as a black'n roll band, then turned into a melodic black metal band with folk and rock influences. Now, they have advanced to their true form, which is an unique take on Scandinavian Black Metal. Lyrical themes goes from the vastness of the cosmos, forbidden northern lore, the hardships and famine of the Swedish 1800-hundreds, the downfall of modern society, etc... Nine - Vocals Tobias Rydsheim - Guitars Jerry Engström - Guitars Daniel Johansson - Drums Oskar Tornborg - Bass