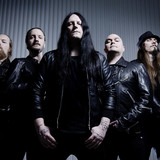 back during the previous tours and the band was tired of the album-tour cycle they'd been on for years. They re-emerged for a tour in 2019 marking the tenth anniversary of Night Is the New Day. At the end of the year, they secretly entered the recording studio. In February of 2020, Katatonia surprised fans with the advance track "Lacquer" and followed it with the full-length City Burials at the height of the global coronavirus pandemic in April. Co-produced by Renkse and Nyström, the album reflected Katatonia's complete transformation into a cinematic prog band. ~ Chris True, Rovi