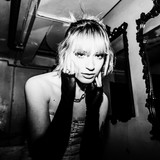 Brooklyn-based artist Chloe Lilac’s sophomore EP, DOUCHEBAG is the culmination of a period of unprecedented growth for the rising artist. It is the result of her hard look inward and is a fearless, anthemic collection of tracks intended to inspire raw strength.   The EP features string of standout singles that have solidified Chloe's place as a veritable force among rising alt/pop artists. She kicked off 2020 with "HERE'S YOUR SONG," which saw critical love from outlets such as The FADER and UPROXX, who noted the track "shows another side of Lilac — one that’s more introspective." "OBVIOUS" followed, which was praised by MTV News for its "explosive confidence" and sparked Refinery29 to proclaim, "Lilac is so talented that I can barely stand it." Punk-inspired "MODERATION" touched on Chloe's struggle with mental health, a track which PAPER called "instantly anthemic."   Born and raised in Brooklyn, NY, the now 18-year-old Chloe's humble roots of sneaking out to perform on the streets of NYC by age 13 continue to inspire her artistry. Chloe began releasing songs in 2017 with her first-ever release, “Reckless," breaking the Top 5 on the U.S. Spotify Viral Chart. Chloe toured extensively in 2019 including direct support runs with mxmtoon and Tessa Violet as well as headline dates in NYC and L.A. Chloe also performed at SXSW 2019 and has toured with other rising artists including Charlotte Lawrence, Sasha Sloan, and Rejjie Snow.