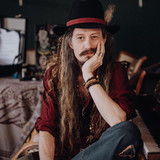 Tiago Sarmento is a Brazilian folk singer/songwriter with more than 20 years on the road, playing from small pubs from big venues, from a couple's couvert to a.... yep, a couple's couvert... Tiago started playing drums at the age of 12 and by the age of 15 he won with his band Dr. Froyd – yes, misspelled like this – a band contest in his town. Then, in 2001 he went nuts assuming his frontman wish-I-could-move-like-Joe-Perry and created Poetas Mortos, when his first song was written with his partner Fellipe Soares, "Fuga". Then life went on, from studio to studio, pub to pub. Until now. 2020 marks a turning point: Tiago is borrowing Lynyrd Skynyrd's record and going international – pronounced Ti-Á-göw Sar-Mên-töw, kickstarting with "Sistine Chapel Girl" from his upcoming record "Ye Olde Road to Reyourselfing", recorded in Portugal after his Ph.D. retreat (yeap, he is a doctor in psychoanalysis. That's called irony for some one who played in a band called Dr. Froyd..). Cachorro Grande's Radolfo Krieger, a major Brazilian band, joined Tiago alongside Gui Amaral in Lisbon to record about Iceland, Barcelona, long lost friendships and, of course, LOTS of wine. Simple tunes to simple words from a simple heart to simple souls. That's what is all about. This is Tiago Sarmento. Well, at least a little bit.