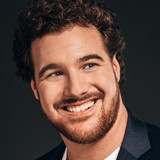 Swiss tenor Mauro Peter is equally at home on the operatic stage and in the recital hall. He began his career singing in the Lucerne Boys Choir. He studied at the Munich University of Music and Theater and the Bavarian Theater Academy, and his teachers included Fenna Kügel-Seifried, August Everding, Christoph Adt, and Helmut Deutsch. He made his operatic debut at the Bad Reichenhaller Philharmonie, and he performed at the State Theater at the Gärtnerplatz, the Bavarian Theater Academy, and the Prince Regent Theater in Munich. He has performed with the Munich Radio Orchestra in performances of oratorios by Bach, Handel, and Haydn, as well as Mozart's Requiem. As a recitalist, he has performed songs by Schubert, Liszt, Wolf, Warlock, and Barber. He is a frequent guest artist at music festivals, including the Schubertiade in Schwarzenberg and Hohenems and the Salzburg Festival. He has recorded Schubert's Die schöne Müllerin for the Wigmore Hall Live label, and Lieder of Schubert and Schumann for Sony Classical.