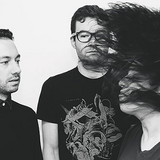 Indie rock trio Posse formed in Seattle after Paul Wittman-Todd and Sacha Maxim met in a bar in 2010 and formed a friendship founded on music. The pair started a band and asked Jon Salzman -- who had also played in Maxim's previous groups -- to join them on drums. The trio took their name from the opening band that was featured in the '90s Nickelodeon show Weinerville. They released their self-titled debut in 2012, which felt indebted to '90s alt rock and the girl-boy vocal dynamic of Yo La Tengo, and later that year they also put out an EP of Smog covers entitled Some Dongs. From their debut on, all Posse's members kept their day jobs, which remained as important to them as the band was. All three members attended university in Washington State, with Wittmann-Todd becoming an electrical engineer, Maxim a graphic designer, and Salzmen a therapist for autistic children. Despite their work commitments, the band forged ahead with their sophomore effort in true D.I.Y. style (Soft Opening was recorded in the basement of Maxim's house, and she also created the artwork for the album). Their sophomore record came out in 2014, and marked the first release on the band's own Beating a Dead Horse label. Their respective career obligations limited touring to a handful of shows in Seattle, but the record was picked up by prominent online sites for review, which brought the band a larger audience. Despite the increased recognition, Posse ostensibly lay dormant for the next couple of years leading to speculation that they had broken up. However, 2016 saw the release of 7" "Perfect H," and the band returned the following year with the single "Kismet." Posse released the six-track Horse Blanket as a free download in November 2017 -- claiming it would be their final recording as a band -- and produced an accompanying comic for fans to buy. ~ Bekki Bemrose, Rovi