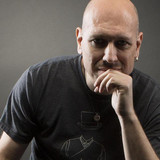 Chris Wirsig is an award-winning composer, songwriter and producer, who enjoyed classical training on piano and saxophone, studied audio engineering at SAE Technology College, and has more than 20 years experience in music production. His music can be heard in games like the acclaimed Top Ten iPad game "Alien Tribe 2," the multiple award-winning short movies "Intervention," "20 Matches," "Cat Dexx: Inkosi," and "Trick Of The Old Cat," the comedy feature film "39 And A Half," and in numerous TV shows on ABC, E!, MTV, Fox Sports, Audience Network/DirecTV, and others. Current and upcoming projects include music for the pilot for a tech-horror web series, "Glitch," an LGBTQ+ animated comedy series, and a charity project with an orchestral cover version of Depeche Mode's "People Are People," a project with 36 musicians and singers, benefitting several organizations fighting for justice and equality, arranged and produced solely by Chris. On the songwriting/producing side, Chris started the acclaimed Electro Pop/Dark Wave band no:carrier in 1995 and the Electronica/Chill-Out project Virtual Conformity in 2001, as well as several side projects. He's also co-writing and producing songs with other artists and songwriters like Psyche, Liza Marie Sparks, Queen Chameleon, The Dust Ryde, echoekill, and many others. Chris is a Grammy Voting Member, as well as a member of the Society Of Composers and Lyricists, for which he also served as LA Administrator for two years.