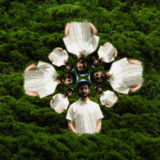 It shouldn’t be easy to adorn wintry folksongs with gushing, futuristic synthesizers from your aunt’s New Age CD collection, but the unifying fascination with inner space, the yearning for tranquility, suggests that perhaps these two estranged halves can yet be bridged. Millefleur, the second release from Sir Orfeo, expands its predecessor Wild Raspberries’ placid puddles into a reflective, supernaturally still lagoon. Its songs are both gentle and arresting (you’re under a rest!) and meld disparate influences, strolling the strange border-lands of chamber-folk, Symbolist images, and ambient minimalism. Though lushness is the word, in these recordings is also apparent a sense of alchemy and disruption, cinema and remembrance. Listen for sampling keyboards, digital reverbs, and synths that sound like birds. Sir Orfeo is the dramatis-persona played by Max Wareham, who learned his trade serving as contributing songwriter to cult classic Cousin Moon, road-dogging as bassist in psych-pop outfit Sun Parade, studying jazz in the conservatory, digging holes on a horse farm, rambling, and touring as an opener and personal driver for British folk legend Martin Carthy. He also lives an alternate life as a bluegrass banjo player and performs with the Peter Rowan Bluegrass Band.