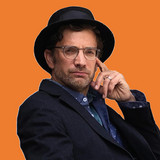 Guy Grogan is a critically acclaimed, prolific, award-winning songwriter and one-man-band based in Santa Fe, NM. He creates singular material that ranges from intimate folky ballads to meditative midnight jazz, and anthemic indie rock--all with a distinct, poetic pop sensibility. Lyrically, he explores the heart space between bitter loss and wisdom while narrating existential themes of aging, the passage of time, and the perils of hope and love. Guy restarted writing, performing and recording his own music a number of after a life-changing event. Since then Guy has self-released numerous albums, singles and EPs, garnering references to The National, Roy Orbison, Elliott Smith, The Jesus and Mary Chain, Dinosaur Jr, The Beatles, Tom Petty, Weezer, and Guided By Voices. While hard at work on his albums, Guy has been the recipient of numerous songwriting awards granted by organizations such as New Mexico Music Awards, Indie International, Song of the Year, American Song-writing Awards, and the UKSC. In the spring of 2020 Guy became a member of The Songwriting Academy and shortly thereafter, released a new full-length album entitled "Same Morning Light" that evokes more intimate, “folkier” atmospheres. Critics have praised his latest effort as one that is "raw, real, and unapologetically carries the aura of brilliant confidence."