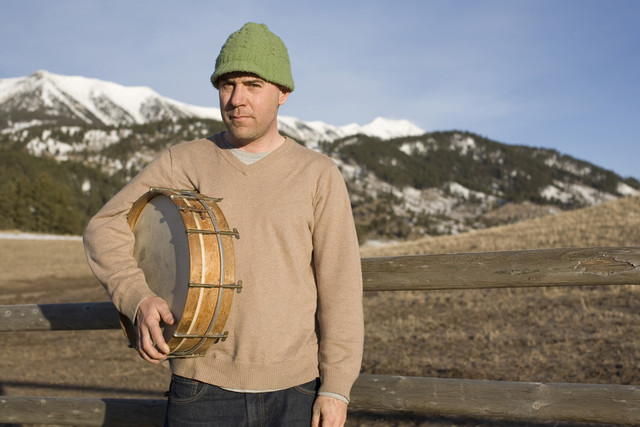 Gauzy vocals and rich, stratified atmosphere mark the Cinemascope indie rock of Jason Lytle, who launched a solo career after his group Grandaddy temporarily disbanded in 2006. His first official solo album, Yours Truly, The Commuter, arrived in 2009. Though Grandaddy re-formed in 2012 (the year of his solo follow-up, Dept. of Disappearance), and he joined the indie supergroup BNQT for 2017's Volume 1, Lytle continued to produce solo material; he issued the instrumental album Arthur King Presents Jason Lytle: Nylon and Juno in 2019. Born in Modesto, California, in 1969, Lytle founded Grandaddy in 1992. Comprised originally of bassist Kevin Garcia and drummer Aaron Burtch in addition to Lytle (who handled vocals, guitar, and keyboards), the band expanded their lineup in 1995 to include guitarist Jim Fairchild and keyboardist Tim Dryden. Following a series of self-released albums, Grandaddy made their independent label debut in 1996 with A Pretty Mess by This One Band, a mini-LP released on the Will Records label. The full-length Under the Western Freeway followed in 1997, and in addition to garnering significant critical notice (especially the song "Summer Here Kids"), the album resulted in a recording contract with V2 Records. The four-song EP Signal to Snow Ratio (1999) and second album The Sophtware Slump (2000) were also critically acclaimed. In addition to a variety of compilations and EPs, Grandaddy released two more full-length albums before temporarily disbanding: 2003's Sumday, which landed at a career-high 84 on the Billboard 200, and 2006's Just Like the Fambly Cat, which reached number 171. The band split in the process of recording the latter, which ended up being something of a solo project by Lytle. In the aftermath, he relocated from California to Montana, where he began assimilating the state's geography into his songwriting. He resurfaced in 2009 with his first proper solo release, Yours Truly, The Commuter, on Anti- Records. After issuing a mini-album of improvised piano pieces titled Merry X-Mas 2009 at the end of the year, Lytle's next move was to form Admiral Radley with former Grandaddy bandmate Burtch, plus Aaron Espinoza and Ariana Murray of Earlimart. Their first album, I Heart California, was released on Espinoza's The Ship label in July 2010. Lytle then returned to his own songs and began recording his second album. Meanwhile, he was recruited by Fairchild to put Grandaddy back together for some 2012 festival appearances. The group played the U.K.'s End of the Road Festival, San Francisco's Outside Lands, and Paris' Rock en Seine Festival as well as some warmup dates. Plans for an album were kicked around, but before that could happen, Lytle released Dept. of Disappearance in October 2012, again for the Anti- label. Lytle moved from Montana to Portland, Oregon, in 2013. The following year, he released House Show, which captured his first performance there on May 17, 2014. He was later approached by an old friend, Mike Cloward, who was executive producing a documentary about distance running, and signed on to compose the score for 2015's This Is Your Day with Espinoza. In 2016, during another reunion tour that featured an old-school lineup of Burtch, Dryden, Fairchild, and Garcia alongside Lytle, Grandaddy confirmed that a fifth studio record was indeed in the pipeline. The band signed to Danger Mouse's 30th Century Records label and released Last Place in March of 2017. Despite getting the band back together for live shows, the album was written and performed by Lytle only, with just a bit of drumming from Burtch. It became their third release to crack the Billboard 200, reaching number 150. In the meantime, Lytle joined Alex Kapranos (Franz Ferdinand), Ben Bridwell (Band of Horses), Eric Pulido (Midlake), and Fran Healy (Travis) -- all lead singers -- in BNQT to record the studio album Volume 1. It arrived on Dualtone and Bella Union that April. Grandaddy bassist Kevin Garcia died following a stroke in May 2017; he was 41 years old. Following his death, Grandaddy canceled all remaining tour dates and remained dormant until the release of the single "Bison on the Plains" in late 2018. When Lytle returned with more solo material in mid-2019, it was with the instrumental album Arthur King Presents Jason Lytle: Nylon and Juno (Dangerbird Records). As indicated by the title, it was recorded with only a Juno synthesizer and a nylon-string acoustic guitar. ~ Jason Birchmeier & Marcy Donelson, Rovi