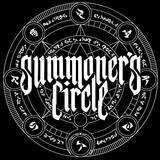 Summoner's Circle is a six-piece theatrical metal band that blends elements of doom, death, black and progressive metal into what they refer to as simply Epic Metal. For the band, every song in an incantation, every live performance is a Summoning, and everything they do is tied intrinsically to the mythology, or lore, they have created. The Summoners released their first EP, entitled First Summoning, in late 2015. This was followed in 2016 by the single, Become None, and its b-side, Minotaur, both of which are included on their independent full-length release entitled Tome, which was released in June of 2018. In November of 2018 Summoner’s Circle signed with PAVEMENT ENTERTAINMENT and in May of 2019 re-released and re-packaged Tome as Become None under the Pavement label. In spring of 2019, Summoner's Circle joined Children of Bodom, Swallow the Sun and Wolfheart as part of Bodom's Hexed North American Tour, gaining many new fans and excellent reviews. In June of 2019 the Six signed a worldwide management deal with Extreme Management Group, Inc. who also manage Suffocation, Cattle Decapitation, Misery Index and many others. Summoner's Circle has completed recording of their second full-length.album entitled Chaos Vector, which will be released on August, 27, 2021.