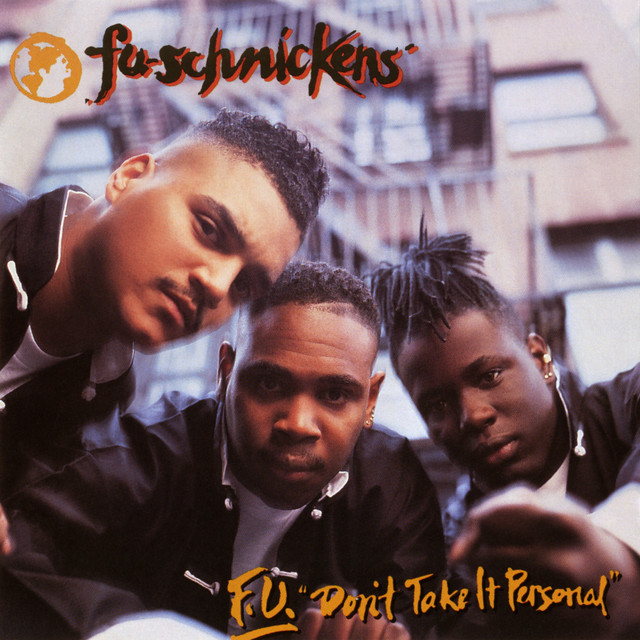 One of the oddest groups in hip-hop history, Fu-Schnickens' manic, wildly playful raps were more than just pop-culture-obsessed novelties: they were often marvels of technical achievement on the mic as well. Spiritually speaking, Moc Fu (born J. Jones), Poc Fu (born Lennox Maturine), and group focal point Chip Fu (born Roderick Roachford) were descendents of De La Soul and cousins of Das EFX. They wove dense, tongue-twisting, absurdist lyrics that were filled with references to cartoons, karate flicks (even before the Wu-Tang Clan), and assorted TV and junk culture trivia. Not only that, their raps were distinctly influenced by dancehall reggae, peppered with comic vocal impressions, and occasionally even recited backward -- at the same high velocity. Their personas were just as colorful; they sometimes wore kung fu-style costumes, and their name was a combination of "For Unity" and a completely made-up word that meant "coalition," according to the group. Fu-Schnickens were formed in the East Flatbush section of Brooklyn, where all three members had grown up, and made a strong impression around New York with a series of club dates showcasing their amazing technique and bizarre sense of humor. In 1991, the group performed at a rap conference at Howard University, and Jive Records promptly signed them up. Their dancehall-inflected debut single, "Ring the Alarm," appeared in 1992 and proved quite popular among hip-hop fans, making the Top Ten on the rap singles chart. The group's full-length debut album, F.U.: Don't Take It Personal, followed close behind, and made the R&B Top 20 on the strength of the cult classic singles "La Schmoove" and "True Fuschnick." However, it wasn't until 1993 that Fu-Schnickens truly caught the mainstream's ear, thanks to the one-off team-up with NBA star Shaquille O'Neal on "What's Up Doc? (Can We Rock)." It was the only Fu-Schnickens single to reach the pop Top 40, and spawned a national catch phrase. The group's second album, Nervous Breakdown, followed in 1994, but didn't cause quite the same stir as its predecessor, and Fu-Schnickens quietly faded away from the hip-hop scene. ~ Steve Huey, Rovi