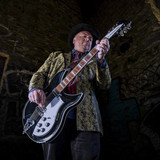 As a six-time JUNO Award Nominee, a Western Canadian Music Award winner, and a three-time recipient of ‘Guitarist of The Year’ at the Maple Blues Awards, David Gogo is highly regarded as an artist in the forefront of Canadian Blues. He has shared stages with an impressive list of blues legends, his songs have been featured in film and television, and are regularly heard on blues radio programs the world over. 17 Vultures is Gogo’s fifteenth release, recorded and co-produced by Rick Salt in Gogo’s hometown of Nanaimo, BC. The album is a mix of fantastic Gogo originals and savvy interpretations of carefully curated covers like The Beatles’ Don’t Bother Me and Bob Dylan’s From A Buick 6. He also gives a nod to Canadian icons Doug and the Slugs with a cover of their song, Tomcat Prowl. The album will appeal to blues and rock fans alike.