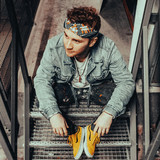 Stanley Stevenson-Byrne, better known as Fox Stevenson (formerly “Stan SB”), sits somewhere between being a club-centric music producer and heartfelt singer-songwriter. Working outside the constraints of genre, he uses influences beyond dance music often tapping into his pop-punk upbringing. The results are songs that bridge different styles of music without truly embodying one genre or the other. You can hear this in his original track, “Bruises (Destinations),” released on UKF, which combines the energy and loudness of drum & bass with the grittiness of a punk rock performance. “Go Like”, released on AntiFragile Music, is a high energy, guitar-driven song that leads into heavy bass drops in the chorus. “Out My Head” and “Dreamland”, also released on AntiFragile, are two more tracks that similarly embody this diversity in style. Fox's highly anticipated debut album, Killjoy, is out now, and has listeners singing and dancing along to melodies, beats, and bass Fox Stevenson LIVE is the long-awaited next chapter in this journey. The project involves live drums, guitar, and Stevenson on vocals. When describing this live three-piece band, he says, "I love melodies, I love big drums, I love big bass, and I love singing over it, and that is the live band." This doesn’t mean the end of his DJ sets! You can still catch him playing festivals and club shows around the world.