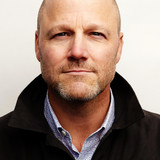 Described by Entertainment Weekly as a “fuzz-guitar blast,” and by Michael Stipe as a “future superstar,” Benjamin Wagner churns up raucous, sing-a-long melodies. But like Jason Isbell or David Gray, he just as adeptly takes a more haunting, contemplative tact. Born in Iowa City, Wagner moved five times before his tenth birthday. When his parents divorced, Wagner moved to Philadelphia. Growing up there in the 80s, he recalls listening, transfixed, to top forty radio, loving everything from Hall & Oates to Phil Collins, Tom Petty to Duran Duran. “Then my brother brought R.E.M.’s ‘Reckoning’ home from college,” Wagner explains. “And everything changed.” Reveling in rave-ups from The Replacements to The Pixies, Yaz to Wilco, Wagner strapped on a Martin acoustic and began playing in bands in high school and later, at Syracuse University. There, Wagner fronted the local alt.pop band Smoky Junglefrog, opening for majors like Mighty Mighty Bosstones and The Samples, and garnering a Syracuse Area Music Award nomination. Wagner’s been working the New York club scene since 1996, treading legendary stages (Mercury Lounge, Sin-e, CBGB’s) and calling the venerable Rockwood Music Hall (where he met his wife of 10+ years), home. He has toured the Northeast and Midwest (often with Iowa pals, The Nadas) and released a dozen EPs and LPs, including include 2016’s “Great Lakes,” 2008’s “The Invention of Everything Else,” 2002’s “Almost Home,” and 2001’s “Crash Site.”