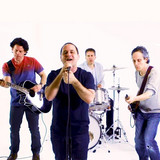 One listen to SKYFACTOR’s A THOUSAND SOUNDS and it’s clear these guys know how to craft memorable and powerful “Rockoustic” songs that grab you from the get-go -- and won’t let go. SKYFACTOR’s simple but effective melodies combine with edgy dynamics to take the listener on a ride each and every time. Their debut album Daydreams received much critical acclaim and notice, including that of MTV’s hit show Teen Mom, who chose the track “OK” as an episode's theme song, resulting in attention from around the world.

The guys also must have a big fan at NBC's The Voice, who used a cut from Daydreams no less than 3 times that season.