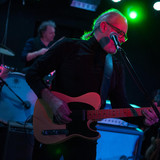 Simon has had an extensive career both as an artist, session musician and producer. Following bands Whitefire and Roadrunner he signed a major record deal with Polydor Germany in 1989 with his band 'Little Brother'. 2011 saw the release of Simon's first solo album, ThirtySix. The perfect showcase for Simon's versatility and profound musical understanding, ThirtySix harnesses a wide variety of guitar styles while being grounded in a deep-seated love of Rock and Blues. For this he was nominated for a prestigious British Blues Award. Simon moved to Valencia, Spain in 2013 to complete work on his next album, The Knife, which was released on October 31st, 2014. This record reflects his increasing love of acoustic music from both sides of the Atlantic and featured Suzy Starlite, attracting great reviews. In May 2014 Simon married bass player, singer-songwriter and musician Suzy Starlite and together, they formed the Starlite Campbell Band in 2016, releasing their debut album, Blueberry Pie in February 2017 and is a fresh taste of British Blues inspired by the the mid-late 60’s electric blues with a contemporary fusion of rock and folk. It has received outstanding worldwide critical acclaim with over 40 four and five star reviews with thousands of plays on over 950 radio stations across the globe; from Memphis to New York, Sydney to Toronto, Amsterdam to London and Paris to Prague. The album was nominated for Best Album / Recorded Session in the 2017 European Blues Awards.