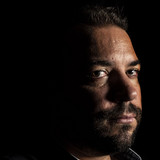 Dominique Charpentier is a french composer renowned within the modern classical world, a fast-growing musical genre including well known artists like Nils Frahm or Ólafur Arnalds. Drawing inspiration from the contemplation of nature (Lou vènt) and the beauty of everyday life (Carnet de voyage), Dominique primarily uses the piano as means of expression. The nuanced breadth of his work has enabled him to sign record deals with an array of modern classical labels, among them 7K! (Germany), Sonder House (U.S.A), 1631 Recordings (Sweden), and Memory Recordings (Italy). He collaborates on a regular basis with talented artists like Klangriket, Kyle McEvoy,

Manuel Zito or Illuminine. In tandem with his solo career, Dominique also composes original soundtrack for movies; "The Cakemaker (Original Motion Picture Soundtrack)", the first feature film he worked on, was acclaimed by critics and audiences around the globe. In 2022 he will release the original soundtrack he composed for "On Our Own Island", a US award-winning documentary, a timeless true love story that chronicles the seasons of a relationship from its romantic beginnings through life’s final moments. More infos at: www.dominiquecharpentier.com Booking & inquiries: charpentierdominique83@gmail.com