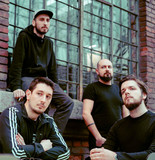 Am Fost La Munte Si Mi-a Placut" ("One Going To The Mountans and Enjoying Themselves") is a Romanian Post-Rock band founded in 2015 by Vlad Enescu, initially as a one-man project. Six months into the release of it's first EP, „Susurul Râurilor Care Curg în Jos, sau în Sus, Depinde Cum Te Uiți” ("The Murmur Of Rivers That Flow Downstream Or Upstream, Depending On How You Look"), in July 2016 a full line-up is completed by Matei Pușcaru on bass, Stere Câmpean on drums and Mircea Becherescu on guitar.   AFLMSMP debuts in a very convenient way, opening for Tides From Nebula in October 2016 in Club Control in Bucharest. As the band quickly gained visibility by the genre's aficionados, they really kicked off their local live performance journey by supporting acts such as Fluturi Pe Asfalt, Fjord, Coma and Alternosfera and also won the Metalhead "Best Alternative Newcomer 2016" award.   In December 2016, AFLMSMP releases a series of Live in The Studio clips on their Youtube channel, consisting of two songs from their first EP and "Nu Faci Dumneata Ordine la Mine în Birou”, a new song from the band's second release. Both recording and filming was done at Blue Cat Studio.   In September 2017, Am Fost La Munte Si Mi-a Placut has released its second material, followed by a national tour.