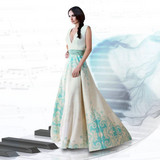 Anita Andreis is an award-winning film composer, singer-songwriter and music producer. Her professional studies on Berklee College of Music, include, specializing in “Production of music for film and games” and Master studies of „Orchestration for Film and TV“. She's been awarded by the Celebrity Scholarship of Michel Camilo.

From a unique style of orchestration and orchestral colours engraved in rich textured compositions to haunting minimalistic piano melodies, she repeatedly creates the subliminal power to elicit a strong emotional response. That combined with the well developed dramaturgical sensibility made her a much sought-after film score composer.