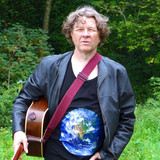 Singer/Songwriter of Switzerland Markus has his roots in the Rockmusic of the 60-ties and in the folk-scene of the 70-ties. He‘s been a member of the swiss folk sceen for the past 35 years and been moving solo and with bands in Switzerland and Europe for many years. Markus is a great singer and guitarist and playing all kind of other folkinstruments aswell. He‘s got a strong connection to Ireland having lived there for some time and in 1980 he did a journey with his donkey "John O'Donohue" & guitar all the way through Ireland, Belgium & France to Switzerland. Since 2006 he's been working on performances to bring consciousness about climate and environmental issues. Markus is known for his engagement for enviroment and peace. 2010 he travelled to Sapmi to discover the Sapmi-Culture and the art of Yoik. He became friend with the the singer Berit Alette Mienna & the fluteplayer Øistein Hansen wich had a great input on his song "Saami-Land".

Since then he keeps on travelling to Scandinavia discovering further roots of the worlds musical heritage. At present Markus plays with his band GreenTrees or SOLO GreenTrees