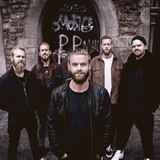 In this ridden world, overflowing with suit-men and influencers, there is one band that seeks to raise the bar. MAKTKAMP wields its powerful musical sword to cut through the static, and herd towards solidarity with intense melodic punk, hardcore and hard rock music. The band was formed in the prestages of a raging pandemic in 2020 and launched themselves with their self titled EP

MAKTKAMP EP in February 2020. After being held at bay like the rest of the music industry, the North/East Norwegian energy ensemble has just come out of hibernation, ready to conquer the rock stage with their first full length album - ready to release in January 2022.