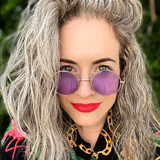 Bright Lights is a multi-Grammy nominated Dance-Pop singer, songwriter, DJ and record producer. She has written for numerous pop stars including Britney Spears, Justin Bieber, Beyoncé and Usher. Her catalog has amassed over 1 billion streams worldwide. More than 150 million of those streams can be attributed to her artist career and include such hits as Porter Robinson's "Language," 3LAU's "How You Love Me," Hardwell's "Never Say Goodbye" and her own hit single "Runaway," which landed in the Top 5 on Billboard's Dance Chart. She was also a featured vocalist on Zedd's #1 Clarity album. She was recently on the cover of Spotify's MINT playlist (Sept 2020) with her latest single "War For Love" gaining massive support across all platforms. "Everyone deserves love and human rights, Bright Lights says in a statement. To that we say, amen." - Billboard Magazine