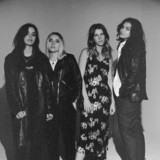 The Aces are ready to greet you now, again. It’s been two years since the quartet released its acclaimed debut album, When My Heart Felt Volcanic. And in those two years, the band has opened for 5 Seconds of Summer, headlined its own tour, and spent a countless number of hours documenting everything in-between (and after) into music. The Aces' music is universally relatable and yet deeply personal, showcasing a confidence only time and true friendship can bring. Together, sisters Cristal and Alisa Ramirez (vocals/guitar and drums, respectively), McKenna Petty (bass), and Katie Henderson (lead guitar/vocals)—all friends since grade school in Provo, Utah—explore growing up and falling in love in the 21st century with candid honesty and endearing relatability.