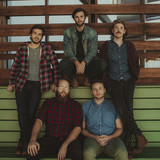 Hailing from the musical mecca of Athens, Georgia and built on the idea that the sum is greater than the individual parts, Family And Friends has steadily gained a loyal following with their spirited live performances and “good music, good people” mantra since releasing their 2015 EP XOXO. Their new highly anticipated album Felix Culpa, produced by Chicago-turned-L.A. auteur Brad Wood and due out June 8th, is nothing less than an epic coming-of-age tale with a massive sound that amplifies their former indie-folk roots onto a technicolor, Cinemascope screen. Whereas Family And Friends’ first EP focused heavily on love, and the second on nostalgia, Felix Culpa is caught somewhere between adolescence and adulthood and finds Family And Friends at a pivotal moment in their maturation both as artists and individuals. With a classic coming-of-age narrative, the album’s theme focuses on a precipice of life’s journey, as we begin the quest for existential meaning and come to terms with the fact that people, relationships, and seemingly universal truths are more complicated than we perhaps realize. Balancing scintillating textures with bright guitars and beautiful vocal harmonies, Family And Friends’ sharply observant lyrics are cloaked in the band’s contagiously upbeat instrumentation, leaving the listener with a sense of hope by album’s end.